A Bill of Lading is one of the most important documents in international shipping. It is a mandatory requirement for customs clearance. It is expected to contain accurate information and the slightest error on it can be costly. Though many industry stakeholders are aware of the hidden detail of a Bill of Lading, there are some who know it as one of the necessary documents for clearing goods from the seaport without a clear understanding of its import. Therefore, the aim of this article is to refresh the minds of industry players and other interested parties who may not fully understand the significance of a Bill of Lading in international shipping.

What is a Bill of Lading?

A Bill of Lading (BL or BOL) is evidence of a shipping contract issued by an ocean carrier to a shipper with detail of the goods being carried to the port of destination. Originally, the term “bill”, is defined as a printed or written statement of the cost for the goods or services delivered or to be delivered. The term “laden” means to put cargo onto a ship.

Typically, a Bill of Lading includes the name of the carrier, contact detail of the consignee, and notify party. A detailed list of goods being transported, number of packages and kind of packaging, weight and/or volume of the cargo, each package’s freight class, terms of payment (which is optional), and special handling instructions are also contained in the BL. Also, a typical Bill of Lading contains the date it was issued and detailed information about the destination handling agent and must be signed by the carrier.

ALSO READ:  The Logistics Industry in the Post-COVID19 Era - Part One

A Negotiable Bill of Lading is common when a Letter of Credit is involved. Here, the Bill of Lading is consigned according to the order of the shipper (which is usually indicated in the consignee column), signed by the shipper, and sent to an authorized bank in the consignee/ buyers’ country. The bank holds the original Bill of Lading until the shipper meets the terms in the Letter of Credit. Meeting the terms of payment means paying the amount specified in the letter of credit. In other words, the bank will order the shipping line or the destination handling agent to release the cargo to the actual consignee once these conditions have been met.

A Direct Bill of Lading is not only consigned to a particular consignee but the shipper or its authorized agent, who takes possession of the consignment(s) or shipment(s) once a signed original Bill of Lading is presented.

The Significance of Bill of Lading

Evidence of Contract of Carriage: It is widely believed to be a contract between a carrier and shipper. However, it can basically serve as evidence that shows the existence of a carriage contract between the carrier of specific freight(s), for the transportation and delivery of cargo to a designated port location, under specific terms and conditions.

Receipt of Cargo: A Bill of Lading can also serve as a cargo receipt when it is issued to a shipper by a carrier through a shippers’ agent when the goods have been received from the shipper or supplier for transportation by the carrier. It also contains a comprehensive detail and description of the condition of the cargo. In other words, in case of a dispute regarding the condition or quantity of cargo on delivery at the port of destination, the Bill of Lading can offer further evidence to prove that the cargo was shipped in good condition from the origin. This also gives the consignee the right to sue in case of any contention on the status of a shipment or disputes arising from the originally agreed terms of carriage. 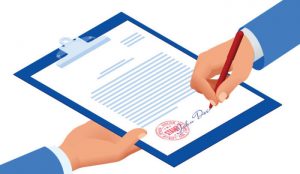 Common Challenges with The Bill of Lading

As important as the Bill of Lading is, there are some common problems associated with it, and these will be briefly examined below:

A single article may not be enough to explore all the legal dimensions of a Bill of Lading, but its importance as evidence of a contract between shippers and carriers is well established. Apart from containing a detailed description of cargo, the terms and conditions of carriage, the fact that it gives room for negotiation and transfer of rights of ownership makes it the most important document in shipping. However, its vulnerability to fraud and conferment of the right of title or ownership constitutes some of the most significant risk elements which should never be ignored or downplayed.